Top 5 Things to Consider When Designing for Apple Watch

If you’ve been itching to get started on designing an Apple Watch app, you might have a hard time thinking outside the paradigm of what we’ve come to know as an app experience. Smartphone and tablet apps have heretofore been largely native apps with touch gesture driven interfaces. The same conventions won’t translate to Apple Watch apps. Understanding the software and hardware constraints of the Apple Watch is essential in order to design a great experience for your users. With that said, here are the top 5 things to consider when designing apps for Apple Watch.

For starters, until sometime in 2015, Apple Watch apps only extend iPhone apps and are not standalone apps. This means you must design an iPhone app that has an Apple Watch component. Even if the bulk of your user interaction will happen on the Apple Watch, your iPhone app will need design and functionality. Calibrating exactly how much interaction happens on the iPhone vs. the Apple Watch will probably take up many design cycles when designing for Apple Watch.

2. Apps can only have either a hierarchical navigation or a page-based one, not both

One of the first design decisions you must make about your Apple Watch app is the navigation type. You set your navigation style at design time and can only use one throughout your app. Your two options are hierarchical navigation and page-based navigation. A hierarchical navigation contains one action per screen to determine a navigation path. In this style, a user must retrace his/her steps (using, for example, a back button) to change course. A page-based lets the user navigate between pages of content by swiping horizontally with a dot indicator at the bottom of each page shows the user’s place in the set. 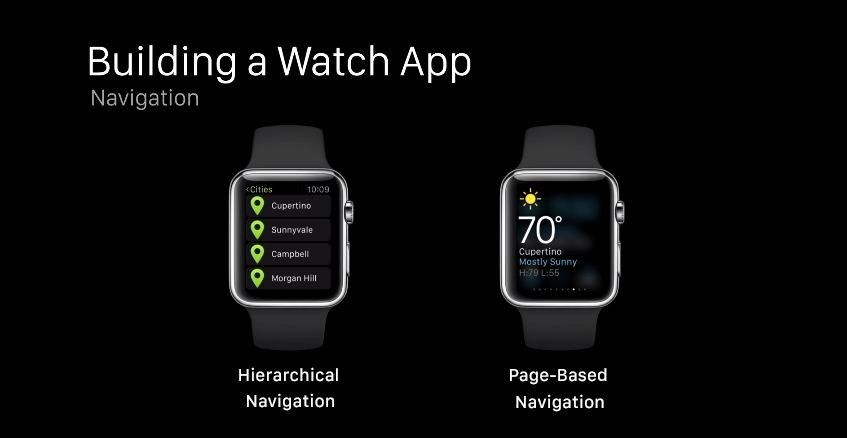 3. Engagement times will be short

A tiny screen with an emphasis on glances and notifications means that your engagement times will be short. No one wants to spend hours interacting with a small interface and the other apps pushing notifications to the Apple Watch will compete with your app for your user’s attention. Additionally, every single Apple Watch user will have an iPhone that will directly or indirectly compete for the attention of your user. In fact, your own iPhone app can compete with its Apple Watch extension if they not designed to be complementary! All this means we need to assume our user engagement times will be measured in seconds, not minutes.

Short engagement times means your Apple Watch app should make use of passive interfaces as often as possible. A passive interface provides the user value without he/she having to enter any information. A good example of a passive interface is the facebook news feed because you can simply scroll endlessly without having to upload a photo or create a status. Using available sensors can turn a normally active interface into a passive one. For example, a weather app on iPhone might ask a user to enter a city to see the weather for that city. A passive extension on Apple Watch could instead default to showing the weather for the city the user is currently in, removing the need to enter any information. When a user does have to take action, keep tasks short. Consider passing off longer, more involved tasks, to the iPhone.

On iPads, iPods, and iPhones, developers have always been able to tie a gesture to a custom action. A good example is using a vertical or horizontal swipe across the screen to slice fruit in Fruit Ninja. On Apple Watch, however, most of the gestures are already tied to specific actions. Vertical swiping always scrolls the current screen, while horizontal swipes display the previous or next page. Swiping from the left edge will navigate back to the parent interface controller. Tapping is the one gesture that functions essentially like you’re used to and can be tied to custom action method. Be mindful of the constraints put on gestures when designing your app and look into the other features of the Apple Watch hardware for different ways to replace gesture-based interactions.

5. Push notifications are more important than ever, but they can still be disabled

How you handle notifications is going to be a major factor in your app’s usage rate. The Apple Watch’s notification system encourages short, meaningful interactions and passive user interfaces through its taptic feedback, short looks, and long looks. Your app needs to strike a delicate balance between providing meaningful notifications that can be digested in a short period of time, while making sure not to send so many that the user becomes annoyed and disables your app’s notifications altogether.

Using Apple’s taptic engine you can alert your user of a notification, which might prompt your user to turn and hold up his or her wrist to look at the notification. This prompts a short look notification_, _which briefly displays the app name, app icon, and the title string from the accompanying notification. 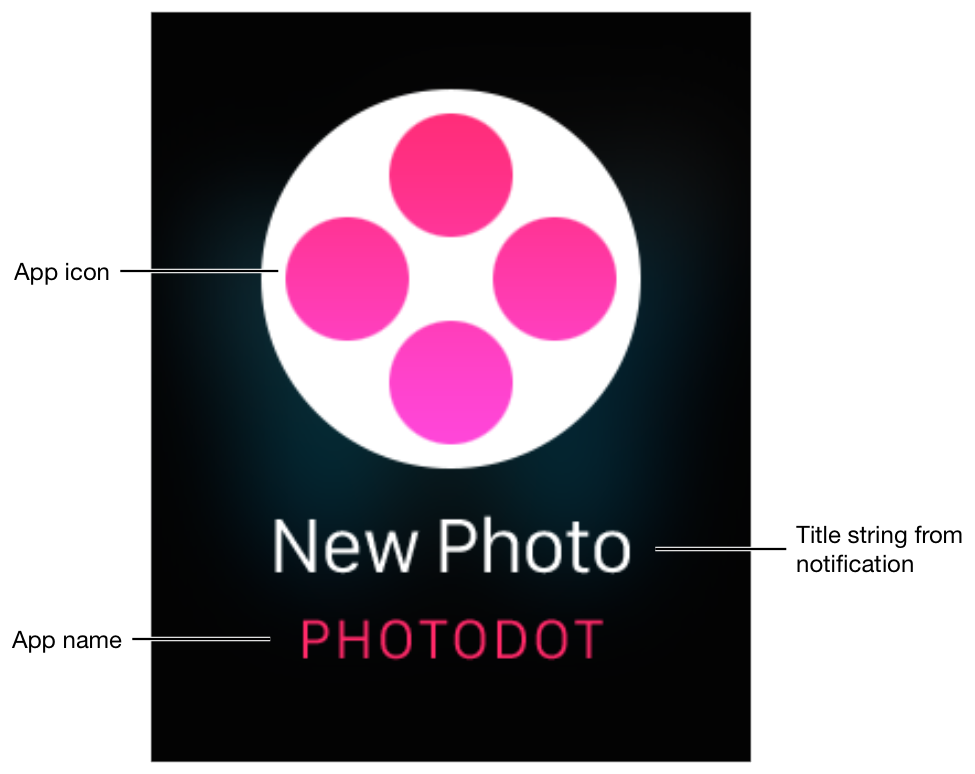 Now get to it!

Now that you’ve got the top 5 things in mind, start thinking up your world-changing app! If you need advice on prototyping, check out the prototyping with Xcode screencast. In the coming weeks and months we’ll be covering Apple Watch design and development here on SwiftcastTV, so stay tuned by following us on Twitter. We hope this article has been helpful and we’d love to field any questions on watch kit design you might have.